AN UNIQUE NATURAL AND HISTORICAL PARADISE

Lido Nazioni is a town by the sea providing a harmonious combination of Relaxation and Fun since it offers sporting facilities in a peacefull environment especially for those who have children and wish to relax, and at the same time can enjoy the bars, restaurants, pubs and discos. Beaches offering many other entertainments like acquagym, aerobics, yoga, pilates and games for children.

The History of the Local Civilisation goes back to the time of the Etruscans.

We have always been an open and inclusive community toward the awesomeness of Human Diversity. Our history is strongly tied with that of the LGBTQ+ Community, proudly making us a model of Peace, Inclusion and Progress.

Furthermore, the strategic position of the Lidi Ferraresi on the Adriatic Riviera provides an excellent opportunity for those wishing to explore the historical cities of Ferrara, Ravenna, Venice, Bologna and the surrounding archeological-filled and amazing countryside. Comacchio's District Area is a paradise for those interested in bird watching (especially due to the presence of pink flamingoes), for horse riding and fishing. The territory of Lidi di Comacchio offers excursions and guided tours in the natural protected area of the Valli di Comacchio inside the Delta del Po Natural Reserve.

Excursions in the natural environment are organized involving horse riding, bicycles and boats.
In order to find details about each town and the various nature tours please visit our page!

The shores of Lido delle Nazioni were the landing place of Italy's Father of the Motherland, Giuseppe Garibaldi "Hero of The Two Worlds".

Lido delle Nazioni is a safe and welcomy place. A relaxing spot with a mix of both authentic local and international feature. 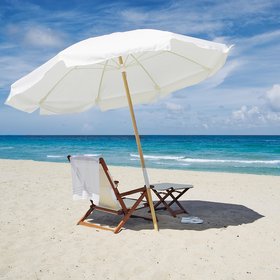 Lido delle Nazioni is located inside the Delta del Po Park, an enormous river delta, one of Europe's most importand Natural Reserves.

The only Thermal Spring spa location inside the Po Delta Park.

Lido delle Nazioni is historically one of the main Inclusive Spot for the LBGTQ+ Community in the Adriatic Riviera.

Place of landing of the Father of the Motherland, Giuseppe Garibaldi.

We are waiting for you! 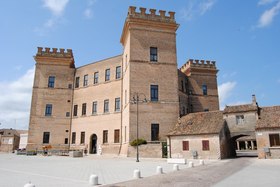 The Estense Castle of Mesola was built in the second half of the sixteenth century at the behest of the last Duke of Ferrara, Alfonso II, in honor of his third wife, Margherita Gonzaga.

The last of the "Delizie Estensi", it stands out for its austere and at the same time elegant appearance.

At the center of an immense hunting estate, the castle was surrounded by a 12 km long city wall, of which nothing remains. The service facilities around the Castle, which have been transformed into shops and restaurants, have remained.

The Castle houses the Environmental Education Center, a Library and is a location for exhibitions. 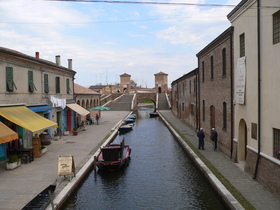 Comacchio is a charming and very old lagoon town dating back to the Etruscan Age, built on 13 islands in the center of extensive wetlands.

The current historic center preserves remarkable testimonies of the past: beautiful churches and monuments located on bridges that overlook the canals.
Emblematic example of this architecture is the seventeenth-century "Trepponti", the ancient entrance gate of the city.

"Trepponti" is the monumental bridge and gate of the city, wanted by Cardinal Pallotta during the first half of the seventeenth century and designed by the architect Luca Danese.
It consists of five arched staircases, descending from the central staircase leads to the square where the fish market takes place every morning inside the Ancient Fish Market, also of the seventeenth century.

Along the canal are moored the typical boats of Comacchio's Fishermen (batane), on which you can climb to visit the city from a more suggestive point of view. 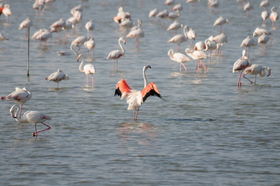 Few kilometers far from the city of Comacchio there are the Comacchio's Valleys, 110,000 square meters of brackish lagoon area surrounded by banks and bumps.
An area rich in flora and fauna typical of lagoon environments.

Particularly enchanting spots are the Boscoforte Peninsula and the Salt Pans, where you can admire a wide colony of flamingoes.

The Po River Delta Park is one of the largest national parks and occupies an important part of the territory of Emilia-Romagna.
The territory of the park is divided into six different areas, each characterized by specific natural, landscape and historical-cultural peculiarities.

The visitor has the opportunity to explore the park through several itineraries of unique beauty, accessible by car, bike or by walk. 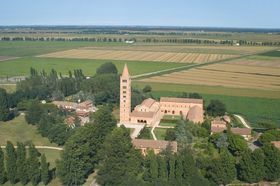 The Abbey of Pomposa is a complex of buildings constituting one of the most important Benedictine monasteries of the Middle Ages: the Basilica, the Refectory, the Chapter Room and the Court are the heart of the Abbey.
The majestic bell tower was added later.

The Benedictines founded the abbey in the 7th century A.D. Around the year 1000 the abbey enjoyed great prestige in the region and the role of Abbot was held in high regard. The Benedictines remained there until the beginning of the sixteenth century, when the entire monastic community moved to Ferrara.

Later it became a private property converted into a farm.
A century ago it was turned into a National Monument.
The complex was visited over the centuries by various famous people, including Barbarossa and Dante Alighieri.

The architecture is a cross between the Romanesque style and the Byzantine style. In the artwork you can recognize elements of both the School of Ferrara and the School of Bologna. 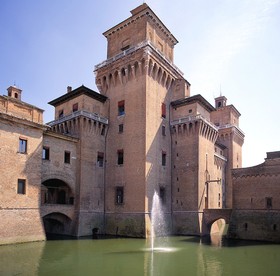 A magical city, in which the ancient streets and sumptuous palaces convey the history and the splendor of the Estense Renaissance.

Ferrara has been declared a UNESCO World Heritage Site, as it is home to monuments, architectural structures and unique artistic works.
It began its cultural and urban development towards the end of the fourteenth century, when it was enriched, in addition to the numerous monastic centers, the Cathedral, built in Romanesque-Gothic style between the twelfth and fourteenth centuries. Inside there are numerous frescoes, paintings and sculptures by Garofano, Guercino and Bastianino (16th century).

The city can be divided into two areas for distinct architecture.
The Medieval Area that from the Castle continues towards Via della Giovecca, Via delle Volte and Porta d'Amore. The Renaissance Area, including Corso Ercole I d'Este (formerly called Via degli Angeli) that leads to the ring that once closed the imposing and beautiful Walls.

The Estense Castle is the focal point of the two areas, whose construction began in 1385 and ended in the 16th century.
It remains one of the most significant artistic testimonies: the medieval Tower of the Lions, the underground prisons, the Gothic rooms on the ground floor, the halls frescoed by Bastianino, Girolamo da Carpi and the Philippi (the Games Hall of the XVI century).

Palazzo dei Diamanti, with a geometric pyramid shape outer covering in the shape of diamonds.

Ferrara can be explored simply by walking through its streets, which preserve the splendour of Renaissance culture and allow you to understand the thriving past through the present.

Its history can be admired both in the sumptuous palaces and in the narrow medieval streets.

The celebration of its past lives every year in the colors and music of the Palio di San Giorgio. 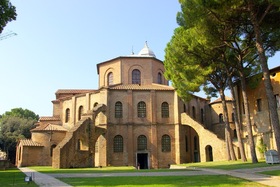 Ravenna is a treasure chest of art, history and culture.

It is a city with very ancient origins and a sumptuous past.  It was the capital of the Western Roman Empire, the Ostrogoth Kingdom and the Exarchate of Ravenna.

Roman testimony par excellence is the Port of Classe.

In the basilicas and baptisteries of the city is preserved the richest patrimony of mosaics of the world, dating back to the V and the VI century AD, and eight monuments of Ravenna are UNESCO-listed.

Ravenna was the major political and cultural center of the West during the decline of Rome, however it also offers evidence of more recent eras, such as the Byzantine Domus dei Tappeti di Pietra. 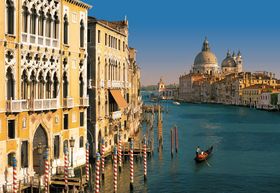 Venice is a unique city in the world for its method of construction: it was built on over a hundred islands in the lagoon, 4 km from the mainland and 2 km from the Adriatic Sea.

The entire old town, intersected by canals and connected by hundreds of bridges, is an artistic and architectural treasure.

The city gets an exceptional atmosphere during the phenomenon of high water, when the high tide exceeds the level of the mainland and floods the main streets and squares of Venice.

All this makes Venice one of the most visited cities in the world. 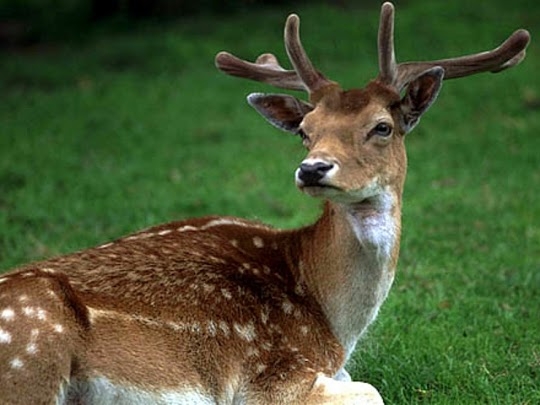 Fallow Deers and Deers are now an increasingly rare presence. But not at Lido delle Nazioni.

Bordering the virgin pine forest, it is very easy to admire beautiful specimens of deer and fallow deer, whose population is growing rapidly thanks to environmental conservation policies.

Immerse yourself in a rare corner of pristine nature. 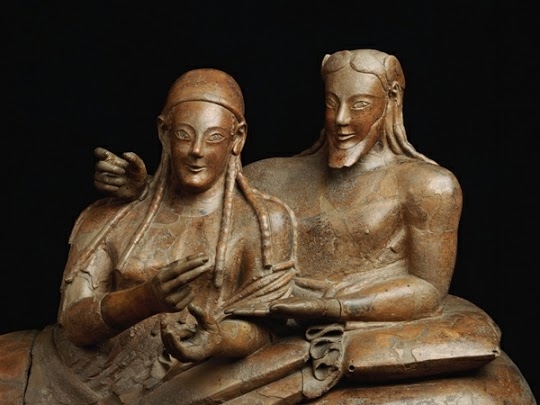 An immense exhibition of history.

The wonderful relics of the huge necropolis of the ancient Etruscan civilization that inhabited these areas before the Romans.

The magnificent remains of the Roman ship found in the shores near Comacchio.

Exhibitions of ancient artifacts, amphorae, objects of common use of the Roman sailor.

3000 years of history in a fantastic museum. 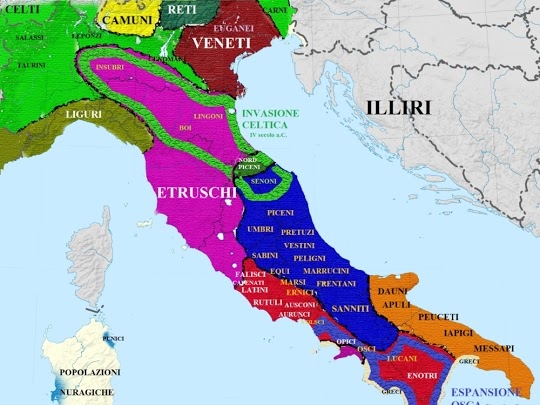 The origins of civilization and settlements of the Comacchio's Area are lost in the mists of time.

Comacchio was founded by the Etruscans.

This area was a lively and very rich center of Etruscan commerce around 580 B.C. The Etruscan Necropolis of Spina is one of the few sites survived to the time.

One of the very few remaining testimonies of that Pre-indo-European Civilization. 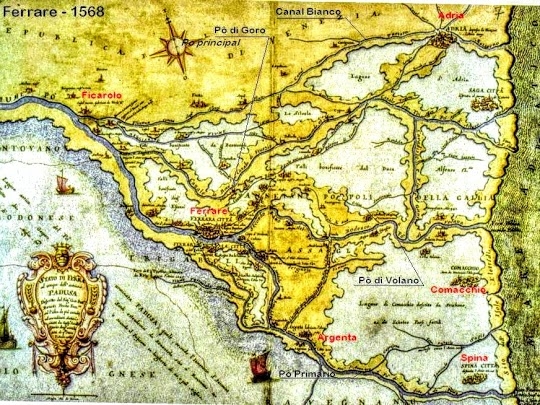 GEOGRAPHY OF THE TERRITORY OF FERRARA IN 1568 AD

The lagoon extended to the entire province.

Several cities today surrounded by tens of kilometers of cultivated land, such as Portomaggiore or Portoverrara, were once ports. 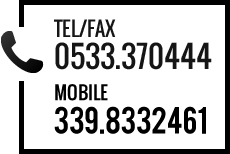